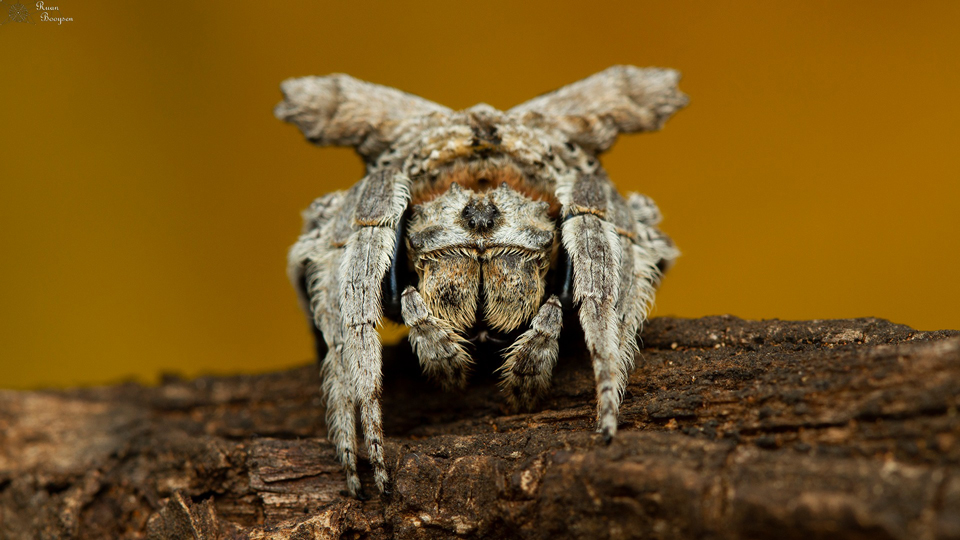 Our May 2022 spider of the month is this horned bark spider (Caerostris sexcuspidata), found by Ruan Booysen in the Namaqua National Park in the Northern Cape.

“Representatives of the genus Caerostris (Araneae: Araneidae) are colloquially known as bark spiders,” said Ruan. “Once you see them, it is pretty obvious where they get their name from. They typically look like bark, thorns, and knobs on trees, sometimes even with some lichen colouration mixed into their camouflage. The females of this group can be fairly large (around 20-25 mm body length), while the males are much smaller (around 5-6 mm) and are rarely seen. The behaviour of these spiders can change depending on the species as some prefer to stay on the branches during the day and only sit in the web at night. Others are diurnal and will stay in their webs the whole day. They make large and very strong orb webs, with some species like C. darwini spanning their webs over rivers upwards of 25 m.”

I also had the privilege to see this spider, and she was one of the cutest spiders I’ve seen in a while. While I took photos, she cleaned herself by rubbing her front legs over her face like a cat. She was also an awkward mover, which is not surprising considering how top-heavy she is.