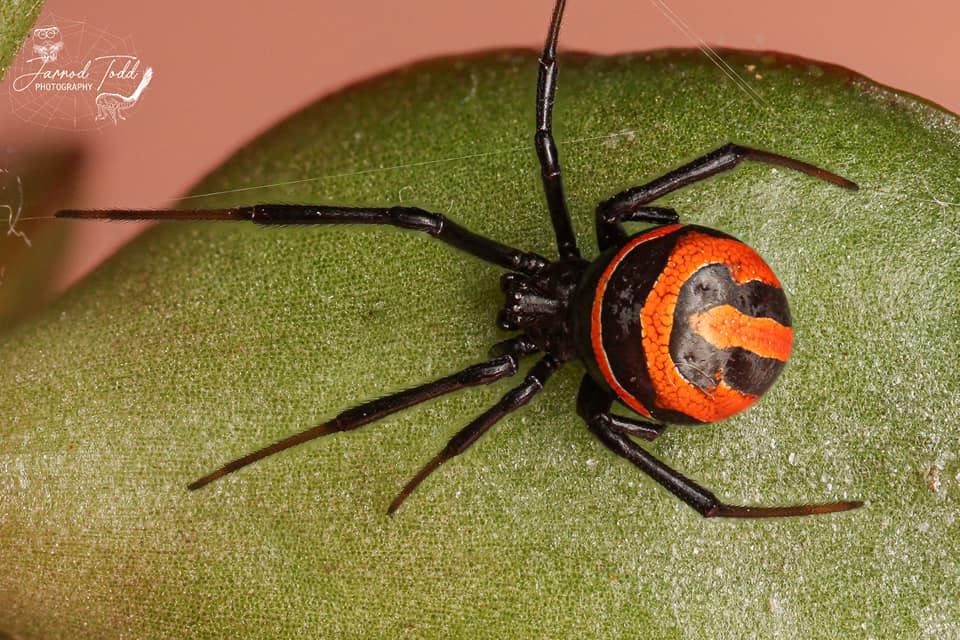 Our June 2022 spider of the month (SOTM) is this inland black button spider (Latrodectus renivulvatus; Theridiidae), found by Wessel Pretorius during a Spider Club spider walk at the Haarwegskloof Renosterveld Reserve in the Overberg region, and photographed by Jarrod Todd.

This is the more common and widespread of four black button/widow spiders found in South Africa; the others being L. cinctus, L. indistinctus, and L. karooensis. We also have three “brown” button spider species (L. geometricus, L. rhodesiensis, and L. umbukwane). The “black” button spiders are our most venomous spiders, with a potent neurotoxic venom, but are very seldom found near human structures, and therefore bites are very rare. Even though not considered fatal, a bite will surely be a very unpleasant experience, and in some cases antivenom might be needed.

“Latrodectus” is believed to mean “secret biter” or “bandit biter”, while the origin of “renivulvatus” is probably a reference to the female genitalia (“vulvatus” refers to strongly sclerotized and protruded vulva; not sure what the “reni” refers to). It is one of 34 Latrodectus species in the world, and this species can be found in Africa, Saudi Arabia, Yemen, and Iraq.

These spiders are rather spectacular as juveniles, with bright orange/red horizontal bands dorsally, and one vertical band that is usually the last to disappear. The first marking that disappears is the ventral hourglass, which completely fades around the fourth or fifth instar. None of our four black button spiders has the ventral hourglass in the later instars, unlike many other Latrodectus species (such as the American black widows and the Australian redbacks).

Jarrod wanted to document these changes, so he took the spider home. He said: “I kept the black button from the spider walk to monitor its progress through each moult. Tracking how the colours and patterns change. I’ve always wondered for most spiders how their appearances change throughout their lives, and the black buttons I was most intrigued by, especially how long they keep those magnificent colours for.”

This is a rather special SOTM because not only is it Jarrod’s first win (out of 49 nominations), but it’s also our very first Latrodectus as SOTM (Jarrod’s L. indistinctus from the same spider walk came in second last month). I believe I speak for many people when I say it’s about damn time! Congratulations Jarrod!

To nominate a spider for SOTM, please visit and join the Spider Club of Southern Africa’s Facebook page.