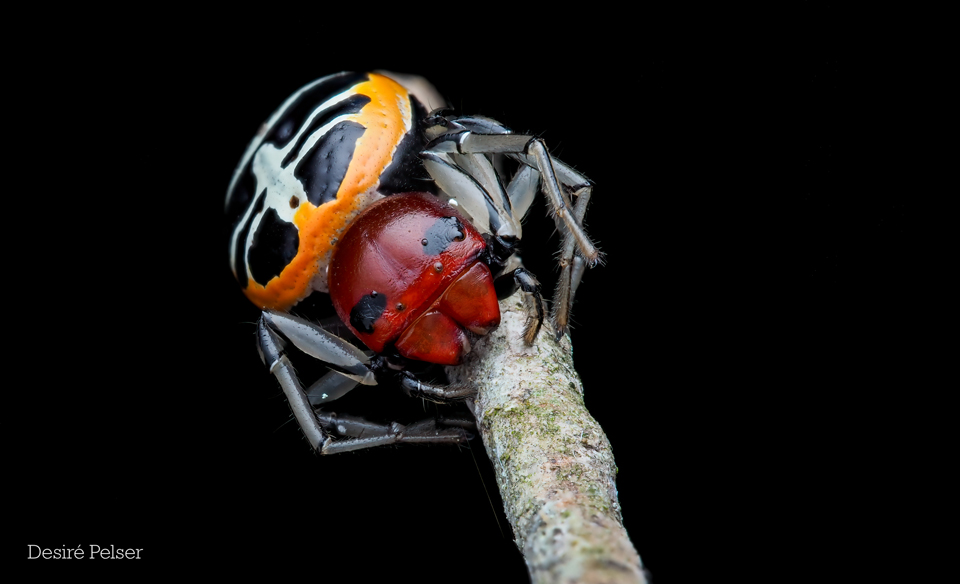 The spider of the month (SOTM) is this black-spotted camaricus crab spider (Camaricus nigrotesselatus; Thomisidae), taken by Desiré Pelser in Kloof, KZN. They are also called ladybird crab spiders, or, as I sometimes call them, Deadpool crab spiders. There are no suggested common names on iNaturalist yet, but I suppose they could also be called “painted crab spiders” due to a few people thinking that it’s a painted ornament instead of a real spider. However, there are a few crab spiders that look painted, like many Platythomisus spp.

Regarding this photo, Desiré had this to say: “What a surprise to find this beautiful spotted camaricus crab spider (Camaricus nigrotesselatus) in my garden in Kloof, KwaZulu-Natal! I haven’t seen this species in my area for at least 3-4 years, so finding one again was very exciting. This one was slowly, carefully exploring a twig on an old tree and her brilliant colours were hard to miss! What a gorgeous creature! For those interested in macro photography, I shot this image on an Olympus EM1 mkii and M.Zuiko Digital ED 60mm f/2.8 macro lens and exposed for a diffused flash (which resulted in the black background). She let me get a few shots before moving on…”