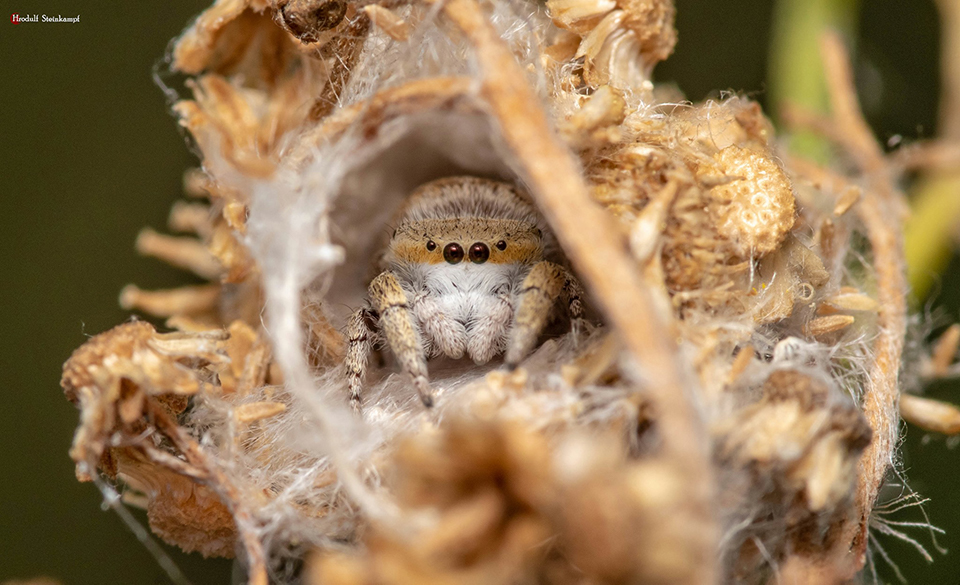 The spider of the month March 2021 is this female jumping spider (Rhene konradi) in her retreat, photographed in Bloemfontein by Rudi Steenkamp (me).

It was only when I viewed the photo on the computer that I noticed the “smile”. This is just how the setae around the clypeus in this specific specimen are arranged, and I haven’t seen this arrangement in any of the other specimens I have photographed. It’s just a coincidence.

These spiders were abundant in our field about two years ago, but after a very harsh winter, and especially after one very cold night (about -12 °C), they all just disappeared. I feared that they were all killed by the cold. It was only recently that I found them again, and ever since then, I’ve found them thriving in our field. They build their retreats in the heads of field grass and flowers, which makes them quite easy to find if you know where to look for them.

They are rather small spiders (about 3 mm) and despite them being “jumping spiders”, I have rarely seen them jump (probably because they’re so “plump”). They are rather slow (as far as spiders go), and therefore quite easy to photograph. I recently had some trouble photographing the male, but only because he didn’t sit still.

The name “Rhene” originates from the name of the mythological Greek wife of Hermes, the messenger of the gods. It means “sheep” or “lamb”, from the Greek word “rhên”. I’m not aware of a “common name” for them. “Sheep jumping spider” would suffice, but unfortunately that common name is now reserved for Oviballus vidae (and aptly so), which was recently described by Galina Azarkina, so we’ll have to stick to “rhene jumping spider”.