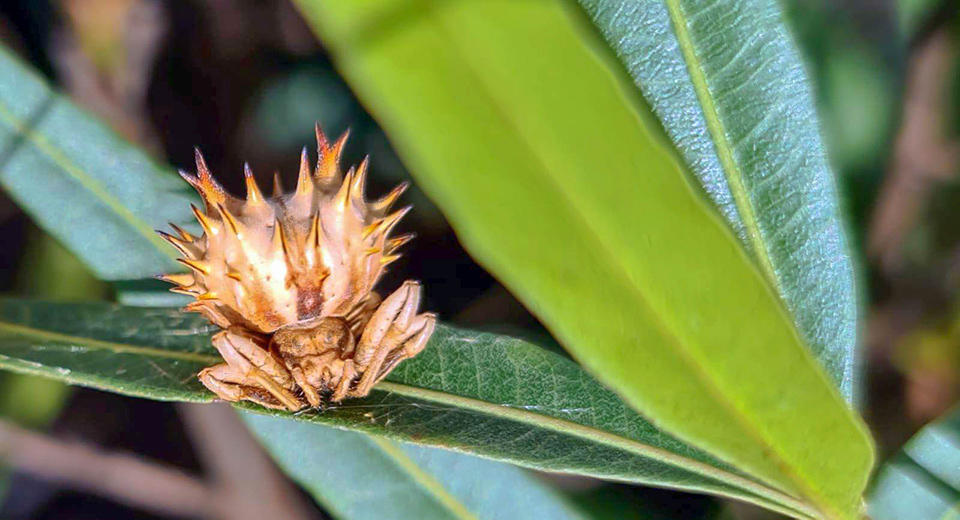 The spider of the month is this hedgehog spider (Pycnacantha sp.; most likely P. tribulus) photographed by Marique Kirwan in the Schurveberg mountains, Gauteng, South Africa. This spider received 41% of the votes.

The spider was found perching on a low branch of a karee tree, with one strand of silk attached to a leaf next to her. Marique’s friend, who found the spider, said: “This was the most amazing spider I have ever seen! I love spiders. Usually I look out for crab spiders and bark spiders (my favourites to date), and love watching the hairy field spiders, etc., so I don’t think I’m blind to spiders, but this one was just amazing!”

“Pycnacantha” most likely means “dense thorns”, from the Greek pyknon (closely packed, crowded, dense) and akantha (thorn). There are a few spiders with the suffix “acantha”, and they’re all “spiky” spiders, such as Afracantha, Gasteracantha, Austracantha, Thelacantha, etc.

These spiders hunt at night by hanging onto their web (basically a reduced orb web where only a trapezium remains) by their hind legs, with their front legs open, waiting for moths to pass by, which are then caught in flight.