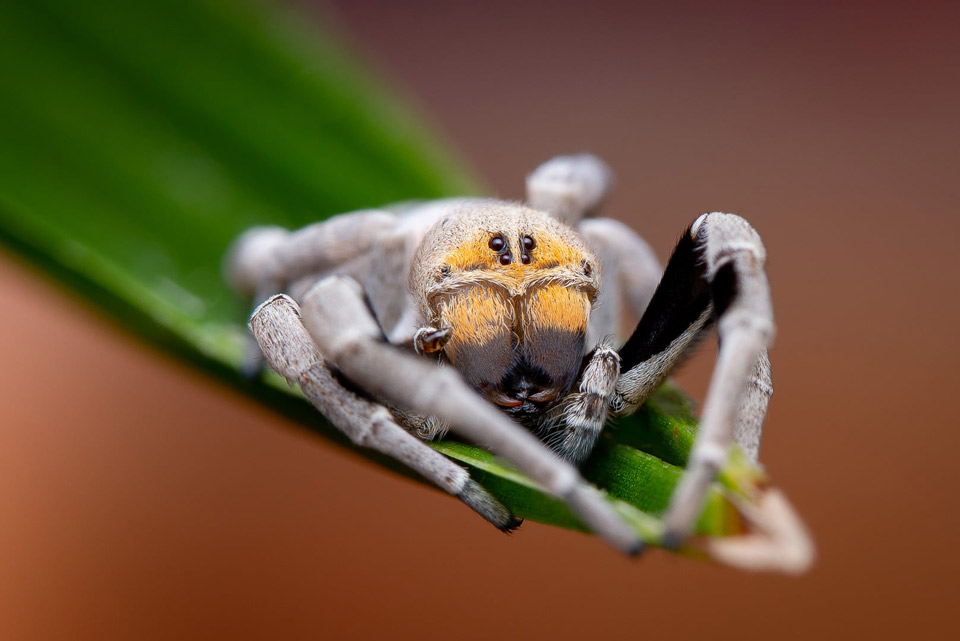 The spider of the month is this female Stegodyphus sp. in the velvet spider family (Eresidae). Hannes Claassens hereby becomes our first three-time winner, and funnily enough, all three wins were with three different velvet spiders. It seems like Hannes has found a winning recipe.

There are 20 recorded Stegodyphus spp. in the world, with six recorded species in South Africa. Of all the species, only three (S. lineatus, S. mimosarum, and S. dumicola; of which the latter two occur in Southern Africa) are considered social spiders.

While the genus Stegodyphus is commonly called community-nest spiders, not all of them are social. Those who are social will range from fewer than 10 in a small nest to often as many as hundreds living in one large nest. This enables them to collaborate and catch larger prey, such as locusts, or even bats and small birds.

The nest is built by joining different nests together instead of merely expanding it from the centre. Each nest consists mainly of female spiders, who will all contribute to the colony by building and maintaining the nest, prey capture, and raising the babies (even if it’s not their own). The females will regurgitate a nourishing liquid for the babies to eat. Some Stegodyphus spp. are also unique in that they practise matriphagy, where the mother (or in this case any female in the nest) will sacrifice herself for the babies to eat. In a social context, gerontophagy also occurs, where the babies eat the older females, whether they’re related or not.

Hannes’ spider is most likely not one of the social species. While the solitary species are more vulnerable to predators, they also don’t run the risk of fungal infection and other diseases in the nest.

Congratulations on your third SOTM, Hannes, and thanks to everyone who voted on the Spider Club of Southern Africa Facebook page!