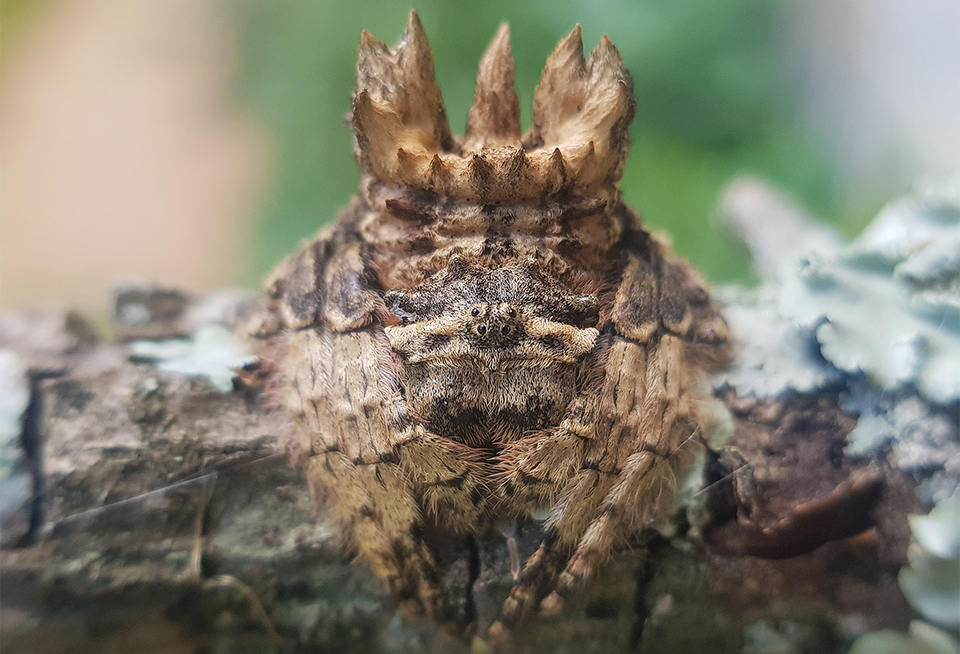 The spider of the month is this common bark spider (Caerostris sexcuspidata) in the orb weaver family (Araneidae), taken by Daniel Lee Owen Rautenbach in Headlands, Zimbabwe. They are also called horned bark spiders, due to them often sporting one, two, three, or more “horns” on the abdomen, or sometimes a complex system of protrusions like this one. The shapes and lengths of these horns vary greatly from one spider to the next, and sometimes they’re completely absent.

There are 18 recorded species in the world, with four of them found in South Africa. Eleven of these species are found in Madagascar, including Darwin’s bark spider (C. darwini), which is the spider with the biggest web, which is usually a metre wide, with bridge lines up to 25 metres long. Only three other species are found outside Africa and Madagascar.

Daniel has photographed a few of these bark spiders (a two-horned one ran in the February SOTM but didn’t place in the top 5). When I asked him about this specific one, he said:

“Because of all the rain we’ve had this season, more than 1 200 mm, it’s been rather difficult to navigate the wet, overgrown bushes and invasive Lantana camara in my backyard. However that doesn’t deter me from going out at night with my torch, looking for spiders!

On this particular night, I had spent several hours scanning the plants and grasses, and seen several cool spiders. At around 11 pm, I was ready to return home when my torchlight caught the reflection of the white bands usually present underneath the legs of bark spiders. Her web was nicely concealed under some Lantana that had overgrown a small tree nearby, which had subsequently died and grown lichen on the branches. She was facing away from me, showing her underside, so I couldn’t take any good photos of her in the web. She was larger than the others I’d previously seen, which seem unbelievably common under the Prunus cerasoides trees!

Early the following morning, I decided to check the spot where I’d seen her. The web was gone, but I knew she was still around somewhere. I scanned all the branches of the tree, and eventually found her upside-down on one of the of the branches, feebly concealed. Carefully I crawled under the Lantana and twisted the branch up, so I could take some photos of her with my phone: a Samsung Galaxy S8 and a homemade clip-on macro lens – a piece of glass from a pellet gun scope.”

Congratulations, Daniel, and keep on showing us the diversity of these bark spiders on the Spider Club of Southern Africa Facebook page.