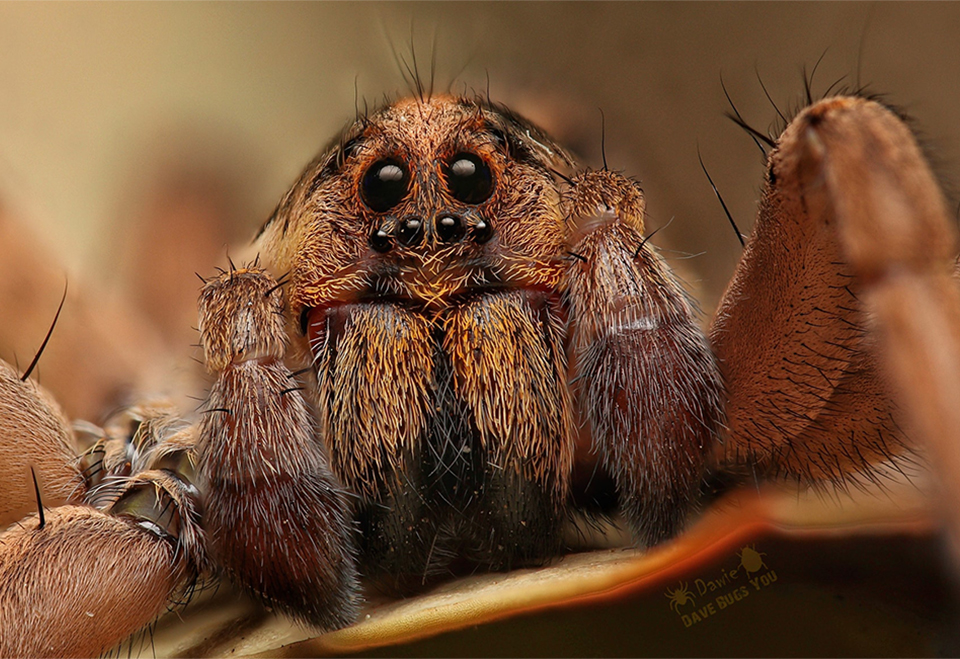 The October spider of the month is this burrowing wolf spider (Hogna sp.; Lycosidae) taken by Dawie Broekman in his garden in Frankfort, Free State.

Dawie found this male while searching with his flashlight at night. Wolf spiders’ eyes reflect light and they are easy to spot if you have a headlight, or hold a flashlight in the middle of your forehead. Dawie says that he focused on the larger eyes to find the larger species, and found this male (the females quickly scurried into their burrows when he approached). Dawie put him on a leaf, and the spider sat still enough for him to take 15 photos for a focus stack (that’s when you take multiple photos each focusing on a different area, and then combine them in post processing to get all those areas in focus in one photo).

The Hogna species (as well as Geolycosa and some Lycosa species, among others) live in open burrows and come out at night to hunt. They mostly rely on a sit-and-wait strategy. Some spiders, like these, when they feel threatened, and possibly as a mating strategy, will raise the hair on their chelicerae to expose the colour beneath. Dawie witnessed this with this spider when he saw that the chelicerae were yellow/orange on a video he took rather than brown like in this photo.

The word “Hogna” is believed to mean “pear” or “pear tree”. I have no idea why… It might be that from the top their body or their carapace is pear shaped, but that’s the case with lots of spiders. It is also believed that the wolf spiders got their name because in some numerous species, like the Pardosa spp., they appear to hunt in groups like wolves, but all wolf spiders are solitary hunters, while members of the subfamily Hippasinae, like our Hippasa spp., make use of a signal funnel web to capture prey.

To enter or vote in the monthly Spider of the Month competition, visit our Facebook page.