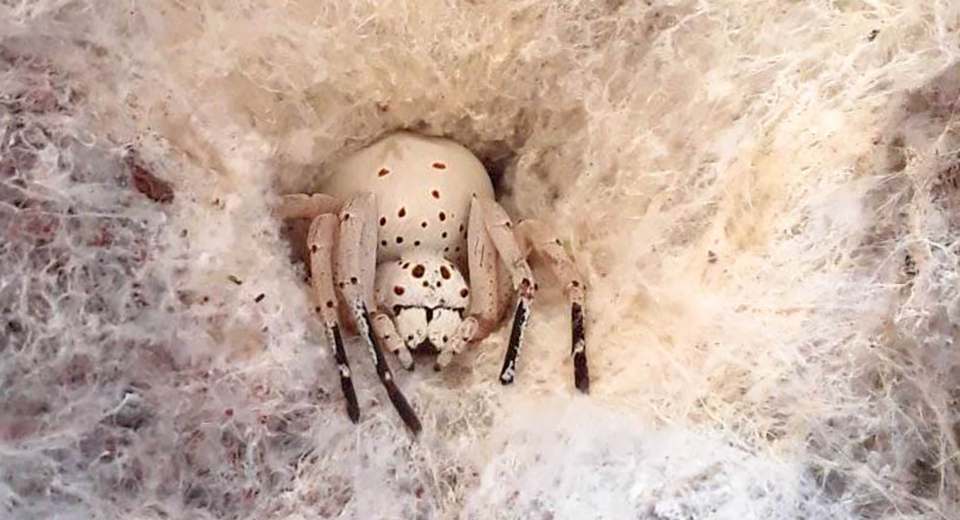 Our June spider of the month is this undetermined (possibly undescribed) velvet spider (family Eresidae), taken by Megean Daniel on a farm near Postmasburg in the Northern Cape. This is most likely either Paradonea sp. or one of the solitary Stegodyphus spp. The jury is still out on that one.

Many of us were first introduced to this spider in 2017 when Leon Lotz won “Best Spider Portrait” at the 12th AFRAS Colloquium for his photo of one he found at the Kalkfontein Dam Nature Reserve in the Free State.

Megean says that the spider “was found in a nest (at first we thought it was a bird’s nest as it looked the same). It was hanging from a tree with the opening of the nest facing the ground. It was nearly on the ground as well. That spider was the only one in the nest with one egg sac. She is absolutely gorgeous and so calm. Her nest looked like feathers with a very soft texture.” She also states that the surrounding habitat is a combination of sand and mountain.

Unfortunately there’s not much I can add about this spider because we don’t really know what genus or species it is yet.

The velvet spiders are clearly a favourite in the SOTM polls and usually win or end in the top five. This one, with 22% of the votes, was closely followed by Daniel Lee Owen Rautenbach’s velvet lynx spider (Oxyopes flavipalpis), and even though it’s not an eresid, it is still velvety in appearance. Third place was another eresid, namely Sharon Brink’s buck spoor spider (Seothyra longipedata). Ruan Booysen’s decorated velvet spider (Paradonea sp.) missed fifth place with one vote, so we almost had all three velvet spiders in this poll in the top five.

Anyway, congratulations, Megean. It’s not often that the first photo someone posts on our Facebook group wins the SOTM, especially with all the talented photographers here.