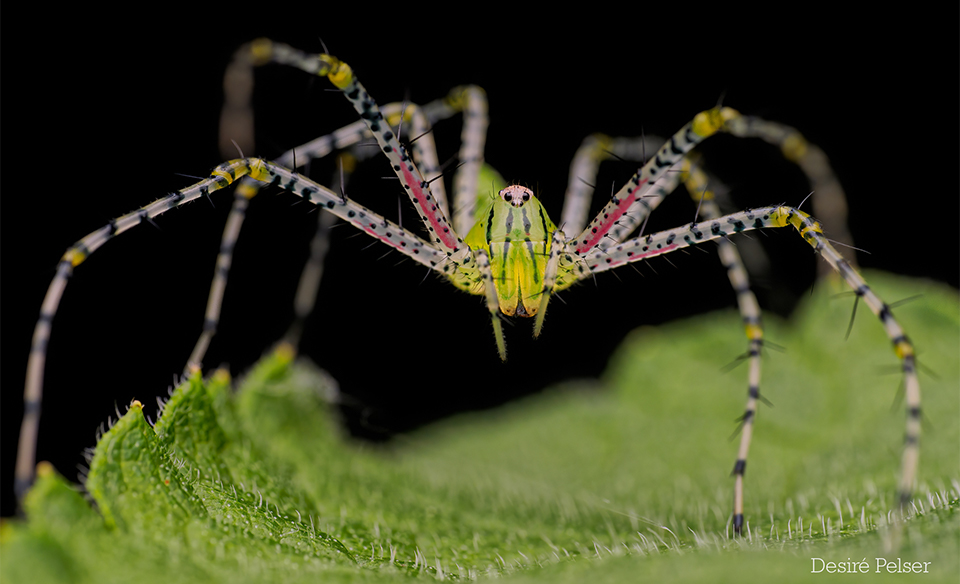 Our first spider of the month (SOTM) in 2022 is this green lynx spider (Peucetia striata; Oxyopidae) taken by Desiré Pelser in Kloof, KZN.

Lynx spiders are free-living plant dwellers that stalk and pounce on their prey, much like that of the cat family, hence the name “lynx spider”. Their scientific name, Oxyopidae, means “sharp eyed”, also much like cats. There are 42 recorded species in South Africa (5 Hamataliwa, 9 Peucetia, and 28 Oxyopes species).

Desiré had this to say about the photo:

“I was wandering around my garden in Kloof, KZN, looking for something to test my new-old Olympus macro setup on. It’s an old camera and lens, but it’s much lighter than my normal gear, which makes crawling around in the undergrowth photographing 6-legged and 8-legged creatures much, much easier. I spotted this gorgeous lynx spider with her spiky legs and striking colouring – what a perfect first-photo series to test the gear!”

The lynx spiders were certainly popular last month, with seven SOTM nominations being lynx spiders, from all three of our genera (Oxyopes, Peucetia, and Hamataliwa).