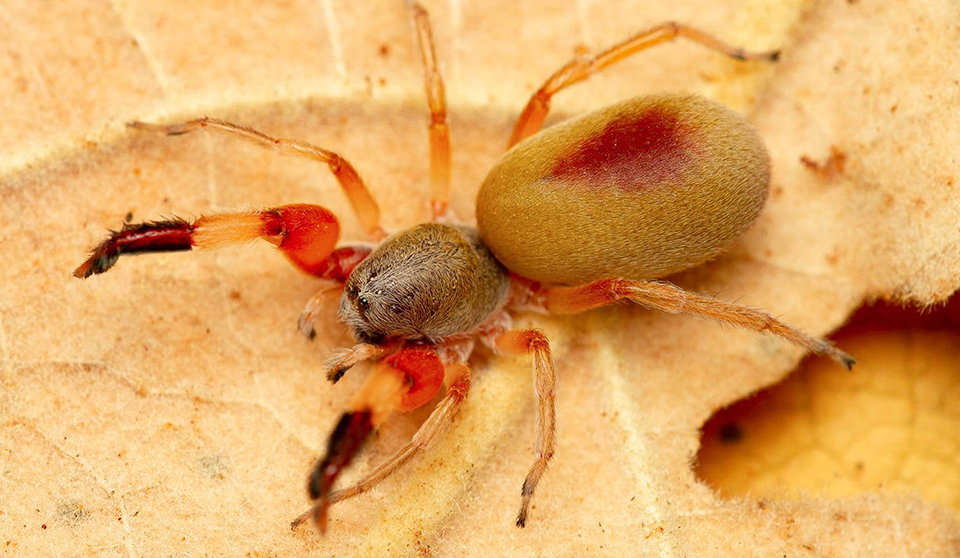 Our August 2021 spider of the month is this palp-footed spider (Palpimanus sp.; Palpimanidae), which is most likely a newly discovered species. The spider was found by Prof. Charles Haddad in the Richtersveld National Park, in leaf litter, but the photo was taken by Ruan Booysen, who accompanied Prof. Haddad on this Northern Cape fieldwork.

Palp-footed spiders are mostly araneophagous, which means they hunt other spiders, mostly spiders that live in retreats. They are rather slow, but after they’ve found the spider in its retreat, they have a fast strike, and their strong front legs can subdue fighting prey. To protect themselves against defensive bites, these spiders have probably the thickest cuticle of any spider, and the bites (or stings, in the cases of other high-risk insect prey) rarely penetrate this thick “skin”.

Palp-footed spiders also stridulate (make a sound) by rubbing their pedipalps against the chelicerae. These sounds are apparently audible to the human ear at short distances, and are made not only to find a mate or when they’re disturbed, but, because these sounds differ from species to species, they also serve to tell another palpimanid that they’re the same species, and should not be eaten.

These spiders are rare, and there are 160 recorded species in the world, with 17 recorded in South Africa. Six of the 20 genera in this family are monotypic, meaning they contain only one species. We have only two genera (16 described Palpimanus spp. and one Diaphorocellus biplagiatus).

To vote or to enter the monthly competition, like and join the The Spider Club Facebook page.