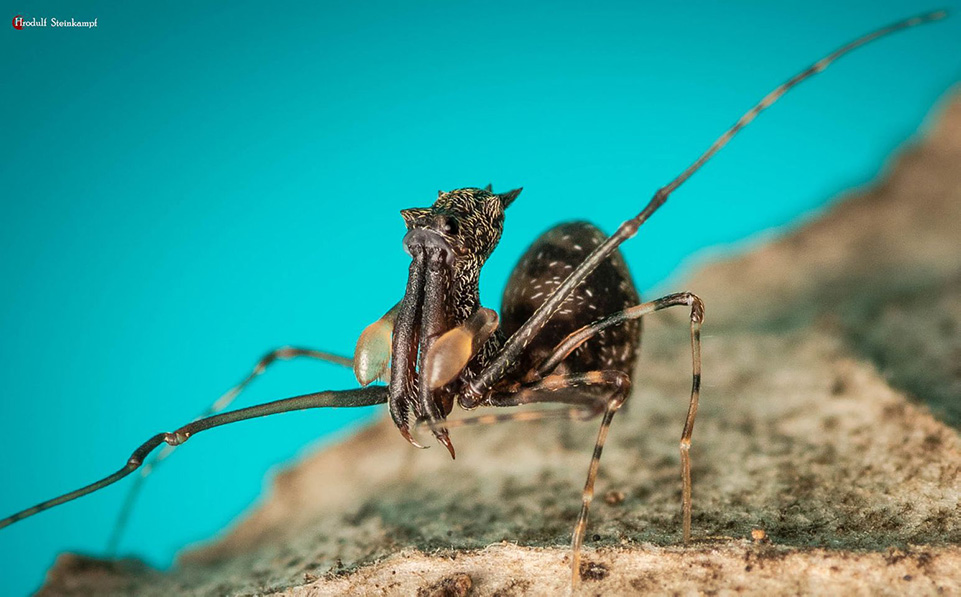 The spider of the month is this subadult male pelican spider (Afrarchaea cornuta; family Archaeidae), found by Ruan Booysen in the Vernon Crookes Nature Reserve in KwaZulu-Natal, and photographed by me, Rudi Steenkamp.

Ruan found him among some grass tussocks, and was quite excited because this was one of the spiders on his bucket list. He also found a female the following day, also in Vernon Crookes.

These small spiders (about 3 to 7 mm) are rare, and only occur in South Africa, Madagascar, and Australia. They are also known as assassin spiders because they almost exclusively hunt other spiders. They are nocturnal hunters, and they usually track the lines of silk that spiders leave behind them. When they arrive at the source of the silk, they use their unusually long chelicerae (mouthparts) and “necks” to strike from a distance and to keep the spider’s defensive bites at bay. Another unusual feature of these spiders is that the female attaches her egg sac to one of her hind legs, and then carries it above her body.

Pelican spiders were first discovered in 40-million-year-old amber fossils in 1854, and were thought to be extinct, but in 1881 the first living specimen was discovered in Madagascar. Today, there are 90 recorded species in five genera in the world, and in South Africa there are 14 species in only one genus (all our Eriauchen[i]us species were moved to Afrarchaea).