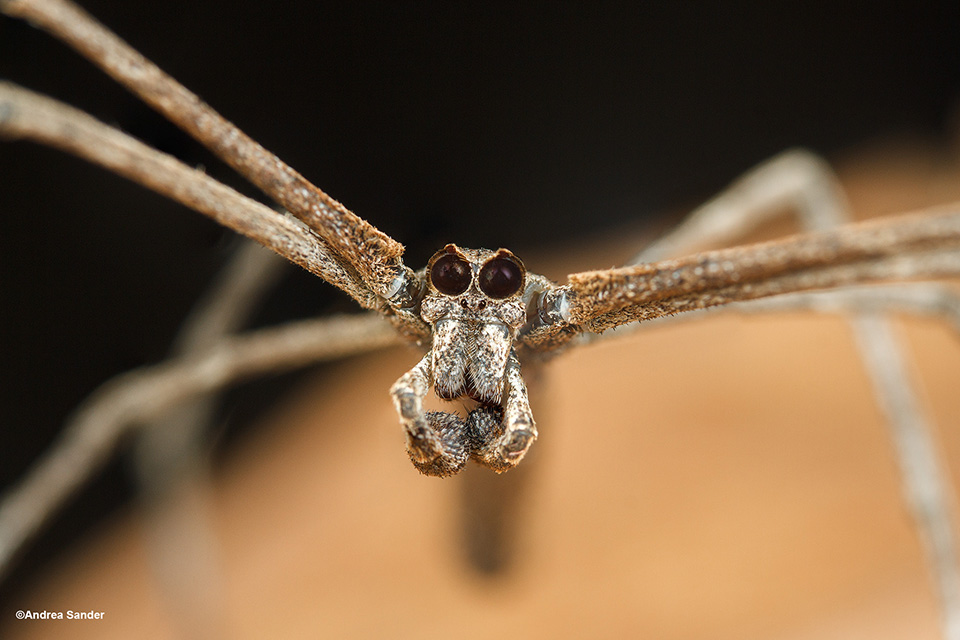 The spider of the month is this subadult male ogre-faced spider (Deinopis sp.), taken by Andrea Sander in Drummond, KZN. While she usually looks for these spiders outside at night, she found this one inside her house on a wall in the morning. She also said: “He was very chilled. The thing I found very fascinating is that his pedipalps look like they are covered in tiny feathers. And of course photographically a challenge to do him justice as his head is tiny with those very big hooded eyes. You almost have to get underneath him or at least from a low angle because of how they face their heads downwards.”

The family Deinopidae is also called gladiator spiders or net-casting spiders. The word “Deinopis” originates from the Greek “deinos” (fearful) and “opis” (appearance). They can be found in tropical and subtropical areas in Africa, South and Central America, Asia, and Australia.

These spiders are nocturnal, and use their very large posterior median eyes to see in the dark. In fact, these eyes are the largest eyes of any arachnid in the world, and they see better in the dark than cats and owls. Since the eyes lack a reflective tapetum (like, for example, wolf spiders have) and because they don’t have irises, they have to create a light-sensitive membrane in their eyes each night, which is destroyed when the sun rises.

To hunt, they spin a little “net” from cribellate silk (no adhesive is used), cut it loose, and then hold it between their four front legs and wait for prey to arrive. They will also drop a little bit of faecal matter on the surface below to use as a target point. This helps the spider to determine the distance to its prey and improves its aim. They will also often measure the distance to the ground with their front legs, to aid with accuracy. To catch their prey, they plunge downwards and catch the prey in this “net”. (See a video of this in the comments.)

The SOTM poll has taken a full turn. Our first SOTM a year ago was also a Deinopis sp. Thank you Andrea (I think she has had at least one contender in every poll so far) and everyone else for posting beautiful and interesting spiders the past year to keep the poll interesting and informative.