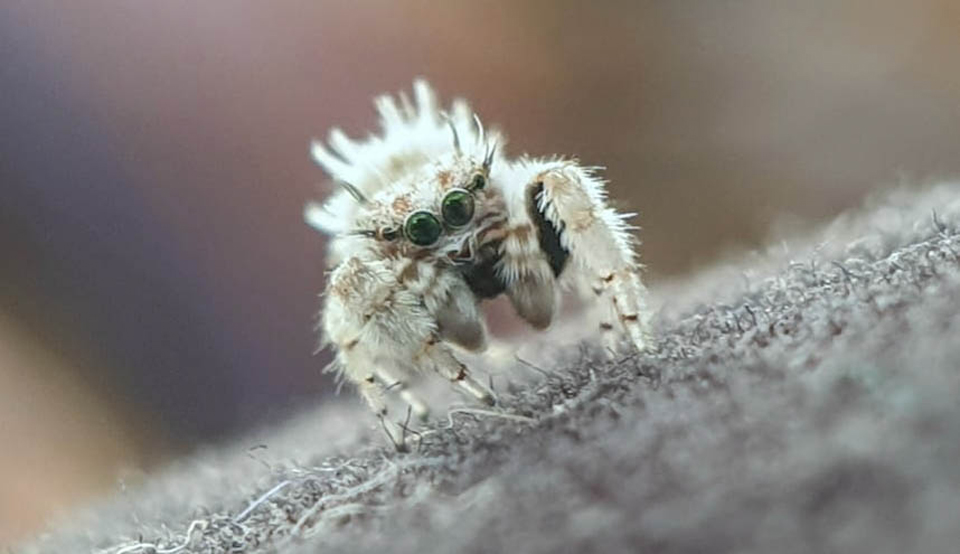 When I asked Debbie for more information, she had this to say:

“I found the first Ballini in the English ivy in my back yard in June. I had a very bad photo, but posted it anyway cos I knew it was the one on Vida’s website. I was surprised when I checked the website for its name, to find it was not yet described. Then Vida got all excited because she’s been looking for these spiders for a while now.

“There appears to have been only a few sightings, and very little is known about them. I was keen to know more, so I have been spending each weekend in the ivy since then. What I have observed is that they look like the smaller scale insects, not necessarily the cottony cushion scale insect, but those that are found with it. I have a lot of insect life in the ivy. Also, I found several retreats reasonably close to each other. When I found a retreat (a little web under the ivy leaf, either just like that, or spun to join two ivy leaves together) there were more than three spiders in a retreat. I collected and kept five sheepy Ballinis in a container for two weeks to observe them. They were happy to cohabitate, although they made their retreats in the four corners of the lid. They were safely released.

“They seem to eat tiny nymph hoppers and tiny flying insects (I’m still identifying them). Lacewings and scale insects are linked. One theory is that they look like the scale insects to be left alone (they are pretty timid). The other might have to do with the lacewings. But I have decided I want to observe them and find out more. Vida has been a great help, and I’m enjoying helping her and Charles Haddad.”

Vida Van Der Walt, who found her first sheepy Ballini back in 2013, can’t disclose too much information at the time, but she said that the paper will be submitted soon, and the spider will probably have a proper name by the end of the year. She also mentioned that Prof. Haddad is working on a paper regarding their behaviour and possible mimicry, with inputs from Debbie regarding their behaviour.

Anyway, congratulations, Debbie, and thanks for your contribution to better understanding these little jumping spiders!